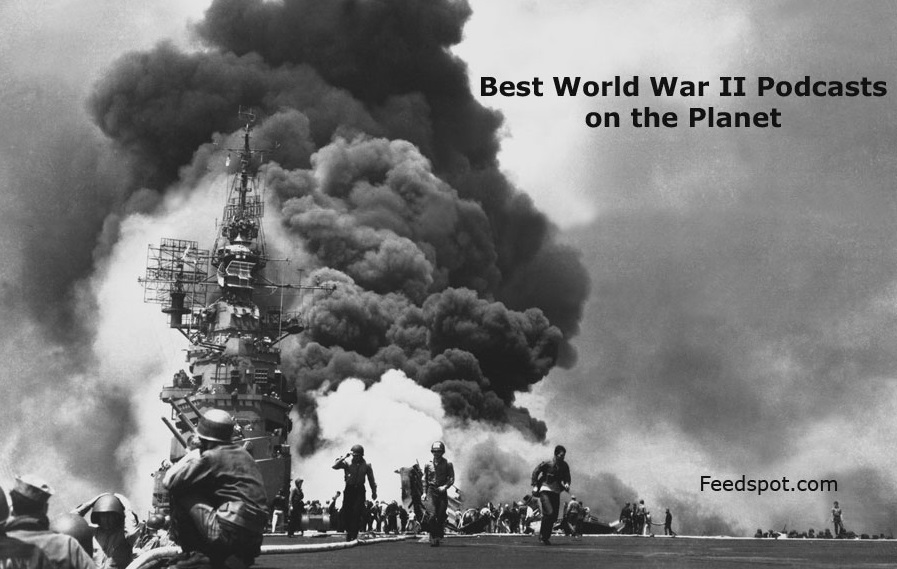 1. The History of WWII Podcast

London, England, UK
A history podcast looking at all aspects of WWII, military history, social history, the battles, the campaigns, tanks, guns and other equipment, the politics, and those who ran the war. I look at it all.
Also in Military Podcasts, Military History Podcasts
ww2podcast.com/cat..
Play⋅ 13.4K⋅ 2.2K ⋅1 episode / week ⋅ Avg Length 53 min Get Email Contact

3. Warriors In Their Own Words | First Person War Stories

Remarkable stories of war told by the men who fought for a proud nation. Their words. Their voices. Our first episodes tell riveting stories from World War II, then we move on to the Vietnam War and other dramatic conflicts.
warriorsitow.libsy..
Play 1 episode / week ⋅ Avg Length 41 min Get Email Contact

Norwich, UK
Hello! I'm Paul Cheall, the son and editor of my late father Bill Cheall's second world war memoirs, Fighting Through From Dunkirk to Hamburg. I live in Norwich, Norfolk, UK. Since Dad's WWII memoirs were published by Pen and Sword, I've been in contact with the families of several of his former comrades. The amazing amount of original, unpublished WW2 material I've been sent inspired me to produce a podcast to share with the whole world what these brave men, women and boys went through.
fightingthroughpod..
Play⋅ 1.3K ⋅1 episode / quarter ⋅ Avg Length 81 min Get Email Contact

On World War II Movie Night, host J. Byron delves into the countless movies made about the greatest conflict in human history. How much can we learn about World War II from how it's portrayed in film? Can movies render this infinite subject more manageable? Fun and stimulation mix in this engaging, thought-provoking podcast.
worldwartwomovieni..
Play⋅ 8 ⋅1 episode / month ⋅ Avg Length 44 min Get Email Contact

7. Peace In Their Time

Peace In Their Time is a history podcast dedicated to explaining the causes of World War II, and how it became the largest conflict that mankind has ever seen. It will be a deep dive into events both global and local that accumulated over the 1920s and 30s, and will cap off with the war years themselves (someday I hope). If you're a fan of historical context and enjoy play-by-plays of nations in crisis, this is the show for you.
peaceintheirtime.p..
Play 1 episode / week ⋅ Avg Length 30 min Get Email Contact

Austin, Texas, US
A podcast for the casual fan of history. The Wikipedia reader. The kids who grew up with a dad who watched the same 10 hours of World War II specials on The History Channel. Join Dan Regester, Rob Fox, and Jake Goldman as they tastefully insert themselves into the past. The only thing we don't show is our research.
soundcloud.com/sof..
Play 1 episode / week ⋅ Avg Length 86 min Get Email Contact

Portland, Oregon, US
The Silver King's War is a series of World War II plays (The Silver King, Marauder Men, Serviceman, and Who Is Della), based on true events about a young man, Stanley Silverfield, who joins the United States Army Air Corps to serve his country as an aviator. Stanley wrote letters to his family throughout World War II from January 1943 to October 1945. He was my dad, The Silver King. I hope you'll enjoy The Silver King's War.
thesilverkingswar...
Play 1 episode / week ⋅ Avg Length 14 min Get Email Contact

11. The Unauthorized History of the Pacific War

US
The Unauthorized History of the Pacific War Podcast is the creation of Seth Paridon and Bill Toti. Seth is a World War II historian with over 20 years experience who's many roles also was serving as a chief historian for The National WWII Museum for 15 years. Bill is not a historian, but is a retired submarine commodore and military planner with a special interest in the Pacific War. Each week, Bill and Seth dive deep into topics pertaining to the Pacific War during World War II.
the-unauthorized-h..
Play 1 episode / week ⋅ Avg Length 73 min Get Email Contact

Analyzing events in history to understand why they happened. The factors that led to various events at different times in history. The show picks certain eras like post-World War II and tries to connect events that happened across the globe around that time.
ajaykaul.com/podcast
Play 2 episodes / month ⋅ Avg Length 24 min Get Email Contact

History on the Net was founded by Heather Wheeler, a historian and former history teacher. The mission to of the site is to explore neglected or forgotten corners of history that changed the world, no matter how strange or controversial. We have blogged on the U.S. Army's failed experiment to use camels as pack animals in the 1840s southwest, failed presidential assassination attempts, and first-hand accounts of the Invasion of Normandy.
historyonthenet.co..
Play⋅ 2.6K⋅ 360 ⋅2 episodes / week ⋅ Avg Length 41 min Get Email Contact

14. The Warrior Next Door Podcast

We explore the oral histories of World War II veterans from interviews conducted by your hosts Tony Lupo and Ryan Fairfield. We play selected clips from these veteran interviews to explore their experiences in their own words with the hosts providing compelling commentary and historical context. Be ready to get some mud on your boots!
thewarriornextdoor..
Play 1 episode / week ⋅ Avg Length 43 min Get Email Contact

A sister project of Casus Belli, the Saga of World War 2 is a podcast with one purpose; to cover the entire second world war from start to finish. An immense task but one that hopefully many will find interesting and informative.
redcircle.com/show..
Play 1 episode / week ⋅ Avg Length 30 min Get Email Contact

16. Stories of World War Two Fallen Heroes and the Researchers Who Find Their Stories.

This podcast is brought to you by the nonprofit initiative 'Stories Behind the Stars'.The name Stories Behind the Stars derives its name from the World War II practice of the military giving the families of each of the fallen a banner with a gold star on it. This podcast is about our journey to accomplish this goal. Listen to our research their stories and the stories of the fallen they have found and shared.
storiesbehindthest..
Play 21 episodes / year ⋅ Avg Length 31 min Get Email Contact

California, US
Scholars and witnesses present evidence documenting the mass atrocities that took place from 1933 through to the end of World War II in 1945, giving voice to the memories of the 6 million Jews and 5 million other victims who were murdered throughout Nazi Germany and German-occupied territories under the command of Adolf Hitler.
podcasts.apple.com..
Play⋅ 29.2K⋅ 6.2K ⋅4 episodes / year ⋅ Avg Length 60 min Get Email Contact

18. Queens of the Sapphire Sea

On the eve of World War II, quick-witted and tough-as-nails pilot Belle Bernassi and her innocent but eagle-eyed niece Madeleine protect the skies of 1930s France by taking down fascists and air pirates alike, becoming the best seaplane duo for hire that the world has ever seen.
queens.buzzsprout.com
Play 1 episode / year ⋅ Avg Length 35 min Get Email Contact

New Orleans, Louisiana, US
Mark Bielski is a historian, writer, and director at Stephen Ambrose Historical Tours and the Ambrose Institute. Listen to historian Mark Bielski discuss history from ancient to modern times with experts in their fields of study, with special attention to the Civil War and WWII.
Also in American Civil War Podcasts
historywithmarkbie..
Play⋅ 242⋅ 48 Get Email Contact

New Orleans, LA
A podcast from The National WWII Museum analyzing how World War II has been depicted on film. Service on Celluloid is a captivating podcast that takes a deep look at depictions of World War II on film over the last 70-plus years.
nationalww2museum...
Play⋅ 335K⋅ 48.7K Get Email Contact